Dealing With the Big L 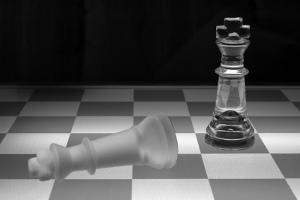 “We are all ready to win, just as we are born knowing only life. It is defeat you must learn to prepare for.”

The villain, Han, in Bruce Lee’s classic film, Enter the Dragon, dished out this bit of wisdom to the coolest good-guy in the film, Williams. As the quote points out, we all love winning, and we do not need any extra help handling it. Whether we sing Queen’s “We are the Champions” or dance to some electronic dance beat tune as the clock ticks zero over a vanquished foe, we have the response to winning covered. The defeat or the Big L; on the other hand, is a totally different scenario. Let’s note, too, that not all losses are sports related. A corporate employee who gets passed over for promotion and misses out on the corner office counts, so since everyone takes L’s, the question is how to respond. Fortunately, there are plenty of examples of people taking the Big L, and here are a few of their methods.

“We didn’t execute the game plan.”

Just like we are born ready to win, we are natural-born salty losers. It’s one of the few entries in life’s spreadsheet everyone can put a check mark next to – Cheeyeaaauhhhk. Throwing shade after a Big L is as common and detrimental as people who smoke when they drink – they not only take the L for the smoking, but they also wake up with a hangover the next day, completing the double-dip into a Stein of bitterness. Check out the relative ease of use for this technique: athlete responds during the always depressing interview after the loss with, “Well, we just didn’t execute our game plan enough,” deftly throws the shade, because under the veil of “not executing,” the athlete is not giving any credit to the other player or team. It’s as if the player lost because, well, he or she decided to take the day off; however, the opposition was the reason the game plan wasn’t executed correctly, right? Without the opposition, the game plan execution functions like the precise Swiss timepieces. Take the L, but take a little piece of that victory away – it might ease the sting of defeat.

“When it(losing) comes, I won’t even notice it…. Because, I’ll be too busy looking good.”

The comeback reply from Williams to Han before Williams’ death. Translation: I am so good at what I do, the outcome doesn’t even matter. Look no further than Sam Hinkie, the former General Manager of the Philadelphia 76ers, for the best example of someone in complete denial regarding the results of his style or process. This guy’s ground-breaking process involves ensuring that the team he manages ends up with a lottery pick year after year. To accomplish this, first, trade any player who is decent at the game of basketball for cash and future draft picks, next, use those picks on players who have red flags due to injury or would rather stay in Europe (Yeah, I’d rather hang out in Europe, too, than sign on to play for this guy’s team). Remember, the entire goal is to continue to get lottery picks until a player the caliber of Michael Jordan, LeBron James, etc. falls into the draft slot. How many years should fans of this process wait: two, three, five, maybe 10 years? Even with ten years of patience, this method is flawed. Michael Jordan retired in 2003 after entering the NBA in 1984. It is 2016 – that’s 13 years after Jordan’s retirement. Add on the years since Jordan entered the league, because there is no equal to Jordan now and when he played, and the number is 32 years. LeBron James is not Jordan, just ask any Chicago fan or Jordan supporter, but he is a superstar. Anyone more versatile than him the 13 years he’s played in the league? All of those options are greater than 10 years, and that’s a lot of losing for fans to watch. Throw in the fact that there are really good players available after pick number 14 such as Kyle Lowry (24) and Paul Millsap (47), who are key contributors on playoff teams, and one wonders how a process like this lasts a week, let alone years. According to Hinkie, it is better to continually dwell in the league’s basement for future picks rather than actually make the playoffs by drafting players like Lowry and Millsap. Even after the 76ers bosses finally sent Hinkie packing, the style over substance king compiled a whopping 13 page resignation letter where he eloquently defends his process as the most genius thing, ever, even after guiding his team to some of most impressive losing stats ever seen: 19-63, 18-64, and 10-72. When the best season is 19-63 for a .232 winning percentage, and the audacity exists to espouse the greatness of a process that forged that ineptitude, I salute you, Mr. Hinkie, the master of the style over substance method.

“Do you believe in miracles? Yes!”

Al Michaels’ famous call is perfect.  There is no better way to accurately describe the outcome of the 1980 Olympic Hockey game between the United States and Soviet Union. The 1980 Soviet Union hockey team steamrolled everyone on their way to the Olympic Games held in Lake Placid, NY. They dominated their competition, and they looked bored doing it. No celebration – just score goals and skate until the clock ticks to zero. To quickly lend a little bit of context to the magnitude of the upset, the same teams played two weeks before the Olympics in Madison Square Garden, and the Soviets crushed the Americans, 10 – 3. Oh, and the Soviets also beat the NHL All-Star team—yes, professional All-Stars. The Soviets were clearly the superior team, but the Americans took advantage of their goal scoring opportunities and a woeful decision by the Soviet Union Coach, the benching of all-world goaltender Vladislav Tretriak, and won the game 4-3. Imagine how the members of the Soviet Union hockey team felt. Their coach made one of the worst decisions in the history of sports, they lost the game to a team they destroyed only weeks earlier, and they were facing the brunt of a hostile crowd fueled by Cold War bitterness. They stood on their side of the ice, motionless, waiting for the Americans elongated celebration to end. Peace treaties were signed in a shorter time span than the duration of the United States team’s celebration, and yet, they patiently waited for the United States team to line up for the traditional handshake after the game. The look on their faces said it all – disbelief.  How could they lose to a bunch of college kids they had just toyed with a few weeks before the Olympics? (This picture of the Soviets captures their disbelief.)

Rematch For the Win

“If at first you don’t succeed, try again.”

Like W.E. Hickson’s quote points out, don’t wallow in defeat, just get a rematch. Most losing scenarios allow for a rematch to possibly avenge the defeat. Win the rematch, and the sting of losing goes away, because most of the time, people only remember the latest match. This is akin to Sugar Ray Leonard’s last-10-seconds-to-win-the-round flurry technique. (Please see the injustice of this on display by watching the Hagler vs Leonard fight, where Leonard steals multiple rounds by “pitty-patting” Hagler with ten seconds left to go in the round, and the judges fell for it – unbelievable.) People are swayed by the last thing that happens in an event. Win the last match, and people forget the earlier losses. In fact, I plan to employ this technique versus my friend, Mike Herndon. I’m still a bit salty that he won consecutive foosball games against me several years ago. All I need is that one win at the end. Never mind the multiple games I’ve already lost.