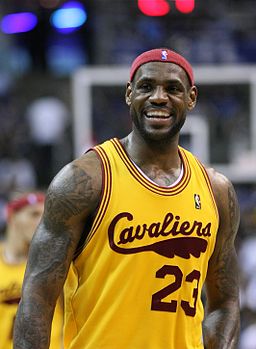 LeBron desperately wanted to deliver a title for the city of Cleveland, and after time expired at Oracle Arena for Game 7, easily the most compelling game of the series, he did just that as the Cleveland Cavaliers outscored the Golden State Warriors 93-89.

“Cleveland, this one’s for you” – LeBron James after Game 7

Overcome with emotion, James collapsed on the floor, signifying that the pure exalted feelings of triumph circulating within himself must have included all of Cleveland as well, because it was too much to handle standing. Was it only a week ago this Cleveland team faced a 3-1 deficit, with two of the remaining games in hostile territory? How many people thought this was possible after watching Golden State demoralize Cleveland at Quicken Loans Arena in Game 4?

“Who am I to hold a grudge?” – LeBron James from SI

Winning is the ultimate compensation – it covers almost any wrongdoing. The same fans who are now cheering their lungs hoarse, praising LeBron James, were the same fans who burned his jersey a few years ago. The “stable” business man at the helm of the Cavaliers’ organization wrote a letter basically calling a grown man a coward, and that is the positive spin version of it. Oh, and one fan wrote a book about James – the title is vulgar, and it represents all that is wrong with fandom and sports. LeBron James, the prodigal son, returned home to win a championship, though, proving that to go along with his otherworldly basketball talent, he is also a pretty good human being, and that is all that matters.

“The game always gives back to the people who are true to the game.” – LeBron James after Game 7

How it must have stung LeBron, one of the most dynamically consistent performers in the NBA, to play championship-caliber basketball for 13 years and never win the MVP by a unanimous vote. Not only did LeBron not win the MVP unanimously, but the person who did achieve that milestone doesn’t appear to take the game seriously as he should. Curry is careless with the ball, doesn’t play great defense, and relies on his outside shot too much. “This is the NBA’s unanimous MVP?” LeBron must have thought out loud while around his inner circle of friends, and his face must have betrayed disbelief and anger. We witnessed LeBron on a mission to prove that he was the real MVP; especially, from Game 5 to Game 7 of the NBA Finals. He made a special point to let Curry know there were no easy buckets as he swatted Curry’s layup attempts. Perhaps his greatest feat in Game 7 was the game-saving block of Andre Igoudala’s layup attempt. It was a trademark LeBron block as he tracked down Igoudala after Igoudala was granted a head start due to the positioning on the court – it was a superhuman effort, the kind of play we take for granted when LeBron is involved. It turns out that we take a lot of things LeBron does on the basketball court for granted. Here are his stat lines for Games 5, 6, and 7.

Even though the numbers are high-class, to say the least, they do not begin to describe the versatility that LeBron provides on the court, his leadership, or his will to win. He outplayed the Unanimous MVP, and it wasn’t even close. There is not much else to add except…mission accomplished. LeBron’s “truth” won out in the end.