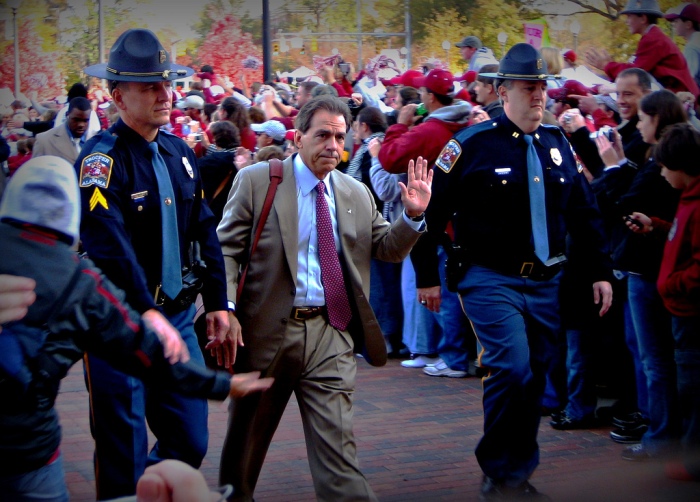 I picked Clemson to beat Alabama in last week’s College Football Playoff semifinal. I knew Alabama’s defense had been beat up most of the season. I knew they were getting healthier. And I picked against them anyway, because I’d seen what Auburn did to them and I knew it wasn’t a fluke. The Tigers didn’t need a miraculous Kick 6 return or a superhuman performance from Cam Newton. They just beat Alabama.

But that wasn’t the same Alabama defense that stormed the Superdome on New Year’s Day and ransacked Clemson’s offense. The Crimson Tide had something to prove. More than one commentator described them as “angry.” Alabama offensive tackle Jonah Williams said later that the offense had seen it all week in practice.

If they were still playing a week later, Clemson still wouldn’t have found the end zone against this defense.

Nick Chubb and Sony Michel are the best running back tandem in the country. They laid waste to Oklahoma’s defense last week, combining for 326 yards as the Bulldogs rallied from a 14-point halftime deficit to snatch a 54-48 double-overtime victory.

But I’m not betting against this Alabama defense again.

I’ve heard some say Georgia’s pro-style offense plays into Alabama’s hands and there may be some truth to that, but I don’t believe that’s entirely it. The biggest rushing performances in recent years that beat a Nick Saban defense came in offenses that feature the zone read — Auburn’s Tre Mason in 2013, Ohio State’s Ezekiel Elliott in 2014 and, to a somewhat lesser extent, Auburn’s Kerryon Johnson this year — but I’m not convinced that those performances were entirely dictated by scheme.

Mason and Elliott would have plowed through Alabama on those nights no matter what scheme they were running out of — zone read, pro-style, wishbone, whatever. The same might be true of Johnson. Mason did have the advantage of Nick Marshall adding 99 yards of his own, but like Elliott, he would not be denied on that night.

That gives hope to Georgia fans for a similar explosion by Chubb and/or Michel. If this were the same Alabama defense that lined up against Auburn a month and a half ago, I’d be ready to predict it.

But it’s not. It is healthier. And if you believe Williams, it’s still angry.

If that defense shows up tonight in Atlanta, Chubb and Michel aren’t going to beat it. That leaves a freshman quarterback and a collection of average receivers to try to back the Tide off with the pass.