Home › NFL › Shooting spitballs at the Death Star: Why we hate the Patriots

Shooting spitballs at the Death Star: Why we hate the Patriots 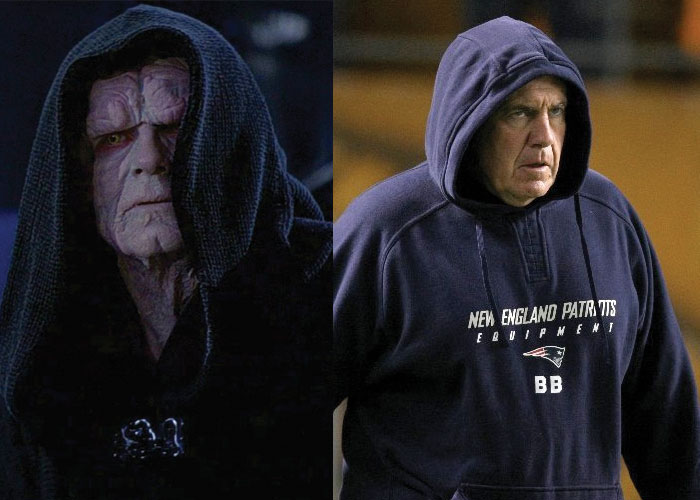 Score another one for the Evil Empire. Sith Lord Brady slew the young, developing Jedi from Atlanta and Pittsburgh — forget the Texans, mere mortals that they are — and the Emperor Belichick rules the NFL galaxy once more.

All Star Wars metaphors aside, most of the country outside Massachusetts had their fingers crossed that the Falcons could destroy the Death Star known as the New England Patriots in Super Bowl LI. In a poll conducted by Public Policy Polling before the game, 53 percent of the respondents were pulling for Atlanta and only 27 percent for New England.

Is that because we all love the Dirty Bird? No, it’s because so many of us can’t stand Flying Elvis.

But why do we hate the Patriots? Tom Brady seems like a nice enough guy. He doesn’t whine or badmouth the Patriots’ opponents, and he is by all accounts a leader in the locker room who allows himself to be coached just as hard and loud as any rookie undrafted free agent. Sure, Bill Belichick is a crotchety old cuss who doesn’t like to talk to the media, but since when has that engendered hatred in anyone other than the media?

And yes, Robert Kraft has dinner with Donald Trump. But admit it: You hated the Patriots long before you knew that, or even knew that a reality show host with bad hair might have a legitimate shot to be President.

With Rob Gronkowski sidelined, there aren’t many other Patriots that most people around the country, aside from avid NFL-watchers, would know well enough to hate — if not for that logo on the sides of their helmets.

So what is it then?

A favorite answer is that it’s because they cheat. Whether it’s covertly videotaping an opponent’s defensive signals (Spygate), taking a little air out of game balls so they’re easier to grip (Deflategate), or somehow catching a key pass in the closing minutes of the Super Bowl that should not, according to the commonly held laws of physics, have been caught (Edelmangate), the Patriots have never been shy about pushing the envelope right up to, and sometimes over, the line of legality.

But they are not alone in this. Videotaping an opponent’s signals is not, in and of itself, against NFL rules — it’s the location from which the Patriots filmed that got them in trouble. And a slew of former NFL quarterbacks like Brad Johnson, Matt Leinart and Jeff Blake admitted that they, too, had game balls deflated to help with grip. And yet few of us spend a spare second hating the Buccaneers, Cardinals or Saints.

If we’re honest with ourselves, Spygate and Deflategate are convenient excuses to avoid admitting the real reason we hate the Patriots. It’s the same reason we hated the San Francisco 49ers in the 1980s, the Chicago Bulls in the 1990s and, regardless of which team he plays for, LeBron James up to this day.

It’s because they’re really good and they win most of the time.

Everyone loves to pull for an underdog. Watching the same team win all the time is boring. Would it really have killed New England to let Atlanta, a town that can claim all of one professional sports championship (1995 Braves), win a title for a change?

What makes it even worse is that the Patriots continue to pile up Lombardi Trophies with castoffs, late-round draft picks and undrafted free agents like Malcolm Butler, Dion Lewis, Julian Edelman and Chris Hogan playing key roles.

Why are the Patriots better than other teams at finding these guys?  Even Brady, you’ll recall, was a sixth-round draft pick. And why are they so successful at taking talented players who have been deemed head cases elsewhere — Randy Moss, Corey Dillon, LeGarrette Blount — and turning them into model, productive citizens?

If Belichick could bottle that and sell it, he’d have a different hoodie for every day of the year.

You don’t need a reason to be a hater, I suppose. But if you’re going to be one, at least know what the real reason is. Would the Patriots still have been the Patriots without Spygate or Deflategate? Of course they would.

They’re successful because they use the draft well, both in who they select and how they stockpile picks; they don’t overpay free agents or their own players; they have a culture that demands winning attitudes and work habits, a culture that is cemented by the view in the trophy case; and Emperor Belichick can flat-out coach.

In three postseason games this year, the Patriots outscored their opponents 67-18 in the second half and overtime. That’s coaching.

We hate them because they win. And that’s OK. It comes with the territory.

Like Loading...
‹ Five reasons the Atlanta Falcons can beat the New England Patriots in Super Bowl 51
Hindsight is 20/20: two crucial plays that helped seal the Falcons’ fate in SB 51 ›