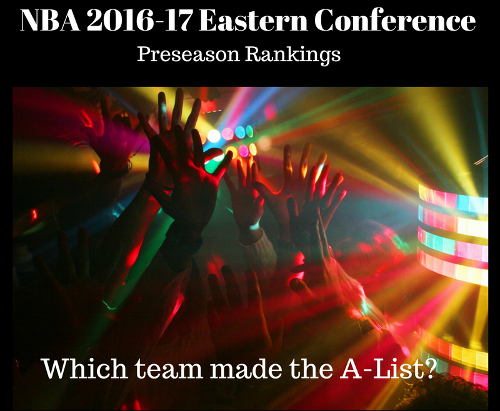 The 2016-17 NBA Season tips off on Tuesday, the 25th of October, which doesn’t leave much time to post the preseason rankings. Nothing like waiting until the last-minute to complete an assignment – yep, old habits are hard to break. Anyway, the ranking criteria will stray a bit from the normal positional hierarchy. Instead of awarding teams with first, second, or third place finishes, they will receive a rating based on their “party” ranking. No, not a political party, but a party where there is music, dancing, and fun. Think of the NBA season as a party invitation. For 82 games, fans get invited to watch their team play. What type of party can the fan expect? Does the team get the “A-List” ranking or the “No one attends but friends” label? Here are the Eastern Conference rankings.

No one attends but friends

Everyone has encountered this scenario: a friend decides to throw a party when either no one is in town, or everyone has other plans, which means that only the circle of friends will attend. The goal of a party is to meet other people, right? Attending a party like this is a disaster, but hey, sacrifices are made for real friendship.

Philadelphia 76ers – This is the franchise that turned losing into a “process” where the goal was to generate lots of great draft picks, accumulate talent, and then watch the talent win. Well, it did generate draft picks, but we are still waiting for the wins.

Brooklyn Nets – Brooklyn was a playoff team a few years ago. Their owner spent a ton of money and mortgaged future draft picks in an effort to make the NBA Finals. It didn’t work. Now, other teams enjoy their draft picks.

Like struggling actors trying to find a part among stiff competition, these teams face the same uphill climb. Maybe the talent is there, poised and ready to pounce on one opportunity, but there is no recent track record of success. In other words, the team may have good players but missed the playoffs the past few years, or the team made the playoffs but lost in the first round, or the team recently went through a major roster upheaval that changed the talent level.

Miami Heat – All-Star Chris Bosh failed his physical and may need to retire as his medical condition is life threatening. Dwyane Wade, the face of the franchise, took his basketball game to Chicago. The Heat still have Goran Dragic, Hassan Whiteside, and a promising young player in Justice Winslow; however, this isn’t exactly the star-studded lineup that featured LeBron James.

Milwaukee Bucks – Young players like Giannis Antetokounmpo and Jabari Parker trying to break things open and make a playoff run – the definition of a C-List team.

Orlando Magic – The Magic still haven’t recovered from the Dwight Howard trade. The talent brought in via the draft picks still hasn’t produced meaningful playoff appearances. They do have the services of veteran Serge Ibaka this year, though.

Washington Wizards – John Wall and Bradley Beal apparently aren’t on the same page regarding the pecking order. Does it really matter if Beal can’t stay healthy? A classic problem confronts this team: c-level stars with delusions of grandeur.

New York Knicks – New York Knicks fans are probably wondering how a team with a star like Carmelo Anthony gets a C-List rating. Well, sure, Carmelo is a star, but when was the last time the Knicks made the playoffs? The Knicks record for the last three years, 32-50, 17-65, and 37-45. Not exactly stellar, right? The last playoff appearance was 2012-2013, by the way. Carmelo Anthony, Kristaps Porzingis, Brandon Jennings, Joakim Noah, and Derrick Rose may lead the way to a playoff appearance, but that outcome is far from a lock as four out of the five players mentioned have trouble staying healthy.

Chicago Bulls – How will Jimmy Butler and Dwyane Wade play together? How many minutes can Wade play? Rajon Rondo and Wade aren’t great outside shooters, and the model for NBA teams now is “pace and space”, so who are the three-point shooters on this team, Doug McDermott and Nikola Mirotic? Won’t teams just rotate or play off of Wade and Rondo to force them to shoot from the outside? Plus, they have a second-year coach in Fred Hoiberg still adjusting to the NBA.

Detroit Pistons –The Pistons are another team with a nice core group of talent. To my surprise, Reggie Jackson’s contract doesn’t look horrible now. Hopefully, he comes back strong from his injury. If only Andre Drummond could make 50% of his free-throws. (Fortunately for Andre, if they haven’t done so already, the league will probably change the rule so he won’t get intentionally fouled during crunch time minutes.) Just like the other teams with a solid base of talent, the question is how will that talent develop over time?

Charlotte Hornets – Kemba Walker, Nicolas Batum, and Marvin Williams are all nice players. Frank Kaminsky can do good things offensively; however, on the defensive end, he struggles. Cody Zeller provides frontcourt depth. Unfortunately, even when healthy Michael Kidd-Gilchrist still doesn’t shoot the ball well – He’s a career 24% three-point shooter. How much can Roy Hibbert contribute? This team’s ceiling is another early round playoff exit.

Atlanta Hawks – Losing Al Horford will hurt this team in more ways than just Horford’s basketball play, because the Hawks chose to roll the dice with Dwight Howard as Horford’s replacement. Teams rolling the dice with Howard haven’t exactly fared well. Dwight can still rebound and block shots, but he thinks he can do more; as a result, he causes problems in the locker room. Yeah, sometimes, the locker room cancer theme is overplayed, but it’s applicable in Howard’s case. They also lost point guard Jeff Teague, who at least was a dependable player. Perhaps, Dennis Schroder can get to the rim at will and create passing lanes for Kyle Korver, who is now 35 by the way, but he doesn’t shoot the ball particularly well. Paul Millsap is fantastic, but he can’t carry the whole team to the NBA Finals. There are too many unknowns for this team.

Indiana Pacers – On paper, the Pacers are worthy of the B-list ranking. Paul George is an outstanding player. The Pacers have also added some extra scoring by acquiring Jeff Teague, Monta Ellis, Thaddeus Young, and  Al Jefferson, so what’s the problem? Well, Larry Bird decided to change the head coach by firing Frank Vogel and hiring Nate McMillan. The reason: Bird wanted more offense. However, isn’t McMillan known more for defense? Obviously, talented players are the primary focus of any organization, but the head coach does matter, and what kind of coach is McMillan?

Teams in this category are backed by sound front offices, they’ve made consecutive playoff appearances, and have the pieces in place to make a nice playoff run. However, just as B-list actors aren’t the bankable stars movie producers count on, these teams aren’t penciled as favorites to make the NBA Finals. One thing to remember, though, B-list actors also make a good living and can appear in A-list movies. The same thing goes for B-list teams.

Toronto Raptors – DeMar DeRozan and Kyle Lowery, two All-Star and Olympic gold medal winners, along with Jonas Valanciunas form the core of a team that gets out-of-this-world support from a great fan base, making opposing teams trips to Toronto a nightmare. (They easily beat the Cavaliers twice in the post season at Toronto.) DeMarre Carroll didn’t live up to the contract he signed due to injuries, but maybe after a year he can return to the form that made the contract offer possible. Even with the loss of fiery big man Bismack Biymobo, the Raptors should once again go deep into the playoffs.

Boston Celtics – Brad Stevens is a great coach who definitely gets the most out of his team. The Celtics acquired Al Horford, who should add some versatility to the Celtics offense while not degrading anything defensively. This team is tough as nails (e.g. Avery Bradley, Marcus Smart, Jae Crowder, Isaiah Thomas, etc.). Adding Horford may not propel them to the NBA Finals, but they’ll definitely get out of the first round of the playoffs this year.

Cleveland Cavaliers – The Cavs have LeBron James, the best player in the league, a dynamic, All-Star point guard in Kyrie Irving, and oh yeah, they are the defending NBA Champions. Tristan Thompson returns to provide rim protection. Plus, J.R. Smith is always must see TV.